Optical Illusions Behind the Scenes!

The Mechanisms behind Optical Illusions

Have you ever seen something that isn’t really there? Could your mind be playing tricks on you?

The “tricks” might be your brain reacting to feedback between neurons in different parts of the visual system, according to a study published in the Journal of Neuroscience by Carnegie Mellon University Assistant Professor of Biological Sciences Sandra J. Kuhlman.

Understanding this feedback system could provide new insight into the visual system’s neuronal circuitry and could have further implications for understanding how the brain interprets and understands sensory stimuli.

Many optical illusions make you see something that’s not there. Take the Kanizsa Triangle for example; when you place three Pac-Man-like wedges in the right spot, you see a triangle, even though the edges of the triangle aren’t drawn.

These spatially separate fragments give the impression of a bright white  triangle, defined by a sharp illusory contour, occluding three black circles and a black-outlined triangle: 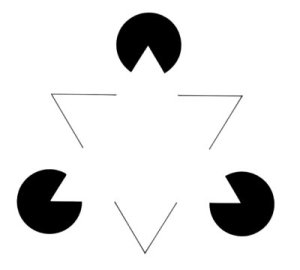 When we look at an object, information about what we see travels through circuits of neurons beginning in the retina, through the thalamus and into the brain’s visual cortex. In the visual cortex, the information gets processed in multiple stages and is ultimately sent to the prefrontal cortex – the area of the brain that makes decisions, including how to respond to a given stimulus. However not all information stays on this forward moving path.

Researchers at the Carnegie Mellon University are looking into the impact that is made by some of these neurons reverting course; at the secondary stage of processing in the visual cortex some neurons reverse course and send information back to the first stage of processing. Assistant Professor Sandra J. Kuhlman and her colleagues are looking at how messages being sent to the prefrontal cortex are being altered and whether this feedback could change our understanding of how the brain works to process visual stimuli.

We are very interested in this research and will look forward to hearing more about what is being discovered about our brilliant brains!

Here are a couple more optical Illusions to get you thinking..

How many animals do you see in this image?

If you look closely, you can see both a young and an elderly woman.
The picture, My Wife and My Mother-in-Law, is a good example of two images existing in one, and was published in 1915 by the cartoonist W.E. Hill.