Dr Frank Martin recently attended the 119th Annual Meeting of the American Academy of Ophthalmology (AAO) in Las Vegas. There were many meeting highlights. Dr Martin was particularly interested in a new treatment for amblyopia being trialled in the USA using programmable electronic liquid crystal display (LCD) glasses.

These LCD glasses, called Amblyz glasses, combine optical correction for refractive error together with occlusion. The glasses are programmed to occlude the stronger eye for regular intervals by intermittent shuttering of one of the lenses, acting much like a digital eye patch.

Amblyz glasses were developed by researchers and ophthalmologists at the Glick Eye Institute of Indiana University in the Unites States.

Recently, a controlled trial of Amblyz glasses was completed, and this was presented at the AAO conference. The study involved 33 participants aged between 3-8 years. All participants had untreated amblyopia, and refractive error. One group wore a traditional adhesive eye patch for two hours per day, whilst the other group wore Amblyz glasses for four hours daily. After 3 months, both groups showed the same amount of improvement in the vision of the amblyopic eye.

A previous study published in 2010 in the Journal of Investigative ophthalmology and visual science, studied the use of these LCD glasses in 24 children between 4-8 years of age. The study participants were asked to wear the glasses for 8 hours per day, of which the LCD occluded the eye for 5 hours per day. An average improvement of 3.5 lines on a vision chart was obtained after 9 months of treatment. The study also interestingly noted a significant improvement to stereopsis. The treatment was very well accepted by both parents and the children, with a compliance rate of 92%.

These two studies of the Amblyz glasses have shown great results that are similar to visual improvements gained when wearing an eyepatch – the traditional standard of amblyopia treatment. In the future, these LCD glasses may offer an alternate treatment for patients with amblyopia where patching using an adhesive patch is not viable. Lager-scale studies are required to further test the Amblyz glasses, but the results so far are very encouraging.

The U.S. Food and Drug Administration has approved the Amblyz occlusion glasses as a medical device. They are available in the United States for around $450. Amblyz glasses are not yet available or approved for use in Australia, but we will keep you updated with further information on this exciting new amblyopia treatment when it comes to hand.

For further information, please read the below articles: 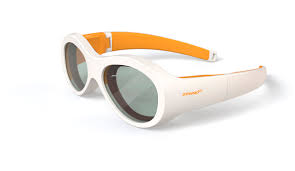